Storytelling has been part of our culture for most of human development. It has been used by every society that has ever been studied. It was and is a way to educate (pass on) values and rules of behavior. Stories, as part of tradition, keep alive truths and values that have been developed in the past. Thus they become guide-posts for creating new ideas and visions for the future. This is true for a tribe in the rain forest of South America to a multi-national corporation. Corporate storytelling protects an organization’s values (heritage) and points the way to its future. One just needs to think of companies such as Disney, Nike, Ford Motor Company to see this principle in action.

One of the important uses for these types of stories comes into place with an organization’s leadership, from executive to manager. Peg Neuhauser, in her book Tribal Warfare in Organizations, talks about the concept of a Sacred Bundle. This is the collection of key stories about the company’s past that represents its important values or characteristics. Often these are seen as useless information – company ego trips. This is not the type of corporate storytelling we are talking about. 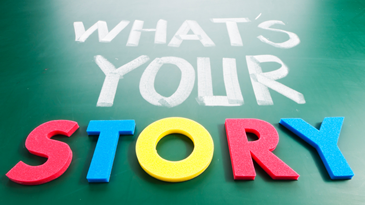 As a leader or manager, it is your responsibility to pass on the organization’s mythology (does not imply myth or lie). Your mythology should answer:

Thus one of the responsibilities of a leader/manager is to teach and guide through stories. For years after Walt Disney’s death, employees would share their “Walt” stories about what Disney stood for and why they have loyalty to the company even after his death. 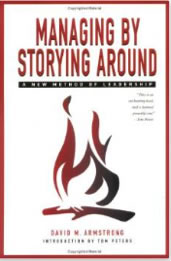 A teaching through story – an example

David Armstrong, the fourth generation of his family to run Armstrong International, had decided to write about his unique management style. He wrote Managing by Storying Around. In this book he shares many of the stories that have been captured and used as management tools. The following is a brief summary of the Cafeteria Story used as part of their employee training.

“In our cafeteria, food and drinks are available to the employees. We do not have a cashier. In fact there is an open cash box. Employees are asked to deposit in the box cash for what they had taken. The box is not locked. At the end of the day, there has never been cash missing and it has always reconciled with cafeteria food and drinks inventory at the end of the day.”

If you trust your employees then demonstrate that trust. If you do not trust them, then fire them.

The summary does not do justice to David’s storytelling abilities but it shows the power of the story when used by management.

Not Just One Story

We often think of corporate storytelling as it relates to the founding of an organization. That meeting over a cup of coffee and a new idea emerges on a napkin – powerful stories but there are many more stories that can be used by management.